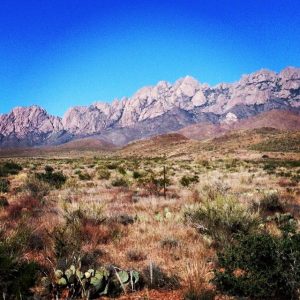 The Organ Mountains near Las Cruces, New Mexico will be protected as part of the larger Organ Mountains-Desert Peaks National Monument. photo by Liliana Castillo/CVNM

Congratulations go to the local governments, tribal leaders, ranchers, sportsmen and conservation groups who worked for a decade to protect these lands!

Senators Tom Udall and Martin Heinrich demonstrated steadfast leadership in their efforts to work with the community and the Administration to ensure these lands are protected for future generations. Our thanks go to Senators Tom Udall and Martin Heinrich for their part in this great achievement for New Mexico. Send your own message of thanks here.

The Organ Mountains-Desert Peaks National Monument in Doña Ana County is located at the crossroads of New Mexican and American history. Protecting cultural, historic and natural sites like this is a profound way to recognize our diverse national mosaic by honoring our American heritage and enhancing our economy by broadening public appeal to an increasingly diverse American public.

The Organ Mountains-Desert Peaks National Monument will benefit both the land and communities. Economic studies show this designation has the potential to add more than $7.4 million in additional annual economic activity and doubling the number of jobs supported by outdoor recreation and tourism industry in the region.

Organizations including the Southwest Consolidated Sportsmen, the League of Women Voters, Communities in Action and Faith (CAFé), Vet Voice Foundation and more than 100 businesses all supported a national monument that protects our cultural and outdoor heritage as well as the iconic lands surrounding Las Cruces.